Since the development of human insulin via recombinant DNA technology in 1982, several medicinal biotechnological therapeutics have been marketed. These products have broadened the treatment armament for use against life-threatening and chronic diseases [1]. Due to costly manufacturing processes and the considerable investment in research and development required prior to their approval, these products are generally high priced. The mean daily cost of treatment with biotechnological therapeutics is estimated to be 22 times higher than conventional small-molecule medicines [2]. Therefore, despite biologicals’ well-known benefits, including providing more specific and life-saving treatments for a variety of diseases, their use will be restricted by ever-increasing healthcare costs. Healthcare authorities have been eager to find more affordable choices to facilitate patients’ access to these therapies. Follow-on biologicals are potentially less expensive options that can deliver the same benefits of originator biotechnological therapeutics.

According to the US Food and Drug Administration (FDA) definition, a biosimilar is a biological product that is highly similar to an already-approved biological with no clinically meaningful differences from the originator [3]. The European Medicines Agency (EMA) was the first regulatory agency to lay down a biosimilar approval framework in 2005 [4]. Following this, in 2006, somatropin became the first biosimilar molecule that was granted European Union (EU) marketing authorization. Since then, several biosimilar products have been launched in Europe. In 2013, an infliximab biosimilar was the first biosimilar monoclonal antibody that received EMA approval. Due to the complex macromolecular structure of biologicals and their manufacturing procedures’ sensitivity to small variations, approval frameworks outline the rigorous quality control and quality assurance measures required to ensure biosimilar and reference products’ comparability. In addition, they define when clinical studies are required to demonstrate that a biosimilar product is highly similar to the originator in terms of efficacy and safety [5].

Following the development of EMA’s biosimilar approval framework, the World Health Organization (WHO) and FDA established their own biosimilar authorization pathways [6, 7]. According to the guidelines published by EMA, FDA and WHO, several countries have established country-specific guidelines for biosimilar approval [8]. The Iranian pharmaceutical regulatory authority (Iran Food and Drug Administration, IFDA) developed its national biosimilar guidance based on WHO guidelines in 2010 [9].

The pharmaceutical industry in Iran began over 80 years ago [10]. In recent years, the commercial potential of producing follow-on biologicals and the favourable economic returns they offer, have encouraged several science-based companies to move towards producing biotechnological therapeutics. In 2000, Interferon alfa-2b was the first follow-on biological that was marketed in Iran. Since then, several other products have been developed and marketed in the country. This product, and other follow-on biologicals that were marketed before the issuance of IFDA biosimilar guidance in 2010, cannot be called biosimilars. This is because many of these follow-on products have not registered or published head-to-head clinical trials with the reference product and have not demonstrated that they are highly similar to their reference product, see Table 1. 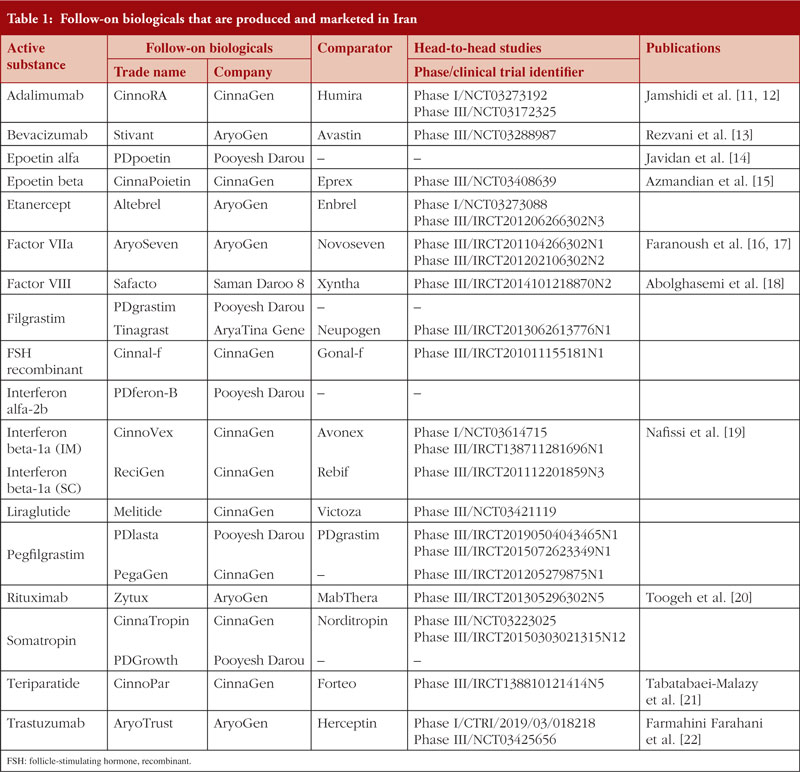 Information from the Iranian Registry of Clinical Trials (IRCT), clinicaltrials.gov, and the International Clinical Trials Registry Platform (ICTRP) was used to identify related phase I and III clinical trials between 2013 and 2018. A PubMed and Google Scholar search was also conducted to find related scholarly articles. The descriptive search terms selected to retrieve data from online sources included the brand name, company name, generic name, biosimilar, clinical trial registration identifier, and Iran. The basic Boolean operator “AND” was used to combine the search terms in various ways in an effort to ­narrow down search results. Several articles were found using the snowball method by referring to article’s bibliography to pinpoint other relevant articles. In addition, information regarding marketing approval date, brand name and pipeline products of the companies were gathered through referring to reliable pharmaceutical, organizational and governmental sites, as well as via Google search in both English and Persian.

The information regarding pharmaceutical products sales was obtained from IFDA database. This database, which is updated annually, compiles information from all the pharmaceutical wholesale and distribution companies in Iran. The information includes the generic and brand name, dosage form, administration route, producer company, sales volume, and value. The proportion of healthcare spending on biotechnological therapeutics was calculated by dividing total sales of biotechnological products by the total sales of pharmaceutical products in Iran. By identifying the originators and follow-on biologicals for each molecule in the database, the total number of units sold (sales volume) and the total sales (sales value) of biotechnological products were obtained for follow-on biologicals and originators. Also, by determining the finished product producer, the share of domestic production and imported products was calculated in terms of sales volume and sales value. The compound annual growth rate (CAGR) was calculated ­during the 2013–2018 period. Since most biotechnological therapeutics were available in different potencies, the number of units sold was converted into a specific potency for each molecule (unified sales volume). The unit price was obtained by dividing the sales value by sales volume for each product. All the sales values and unit prices were converted into United States Dollar (USD), based on the average annual exchange rates provided in the customs administration of Iran (IRICA) website.

At the time of writing, 21 follow-on biologicals are produced and marketed in Iran, see Figure 1. 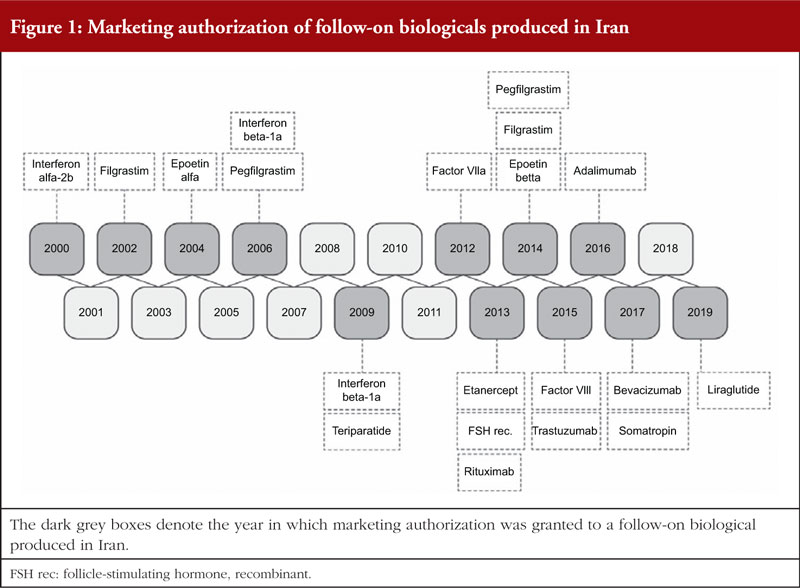 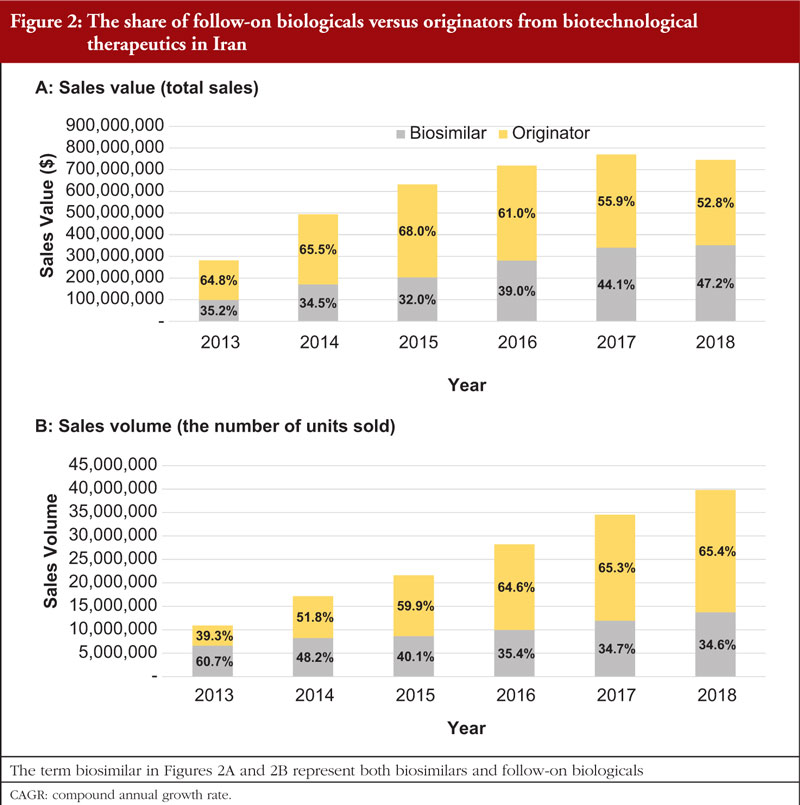 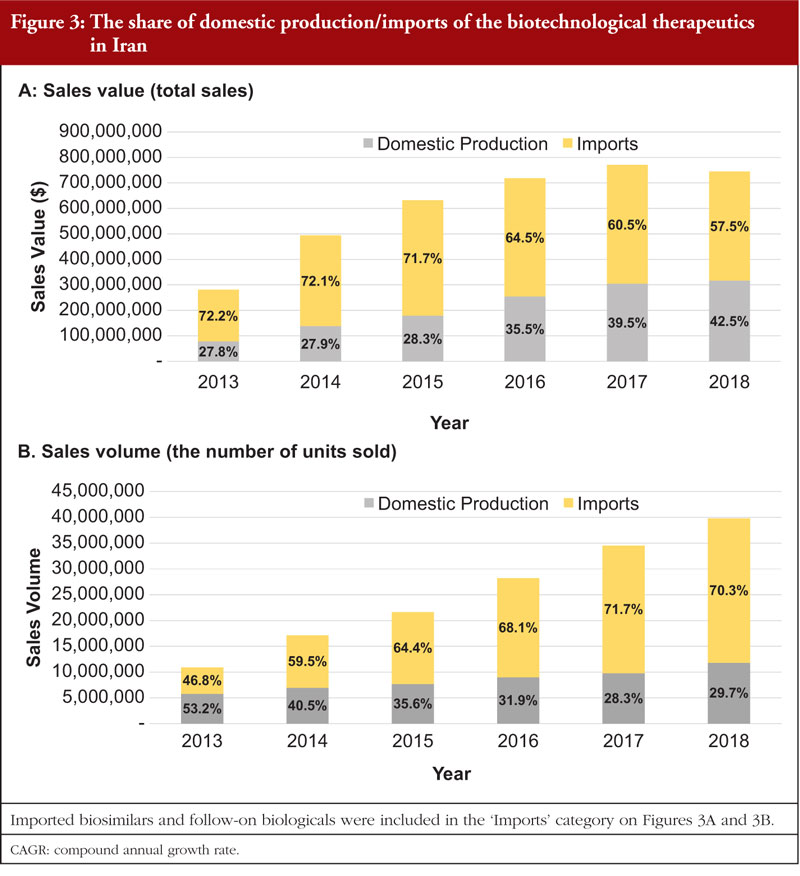 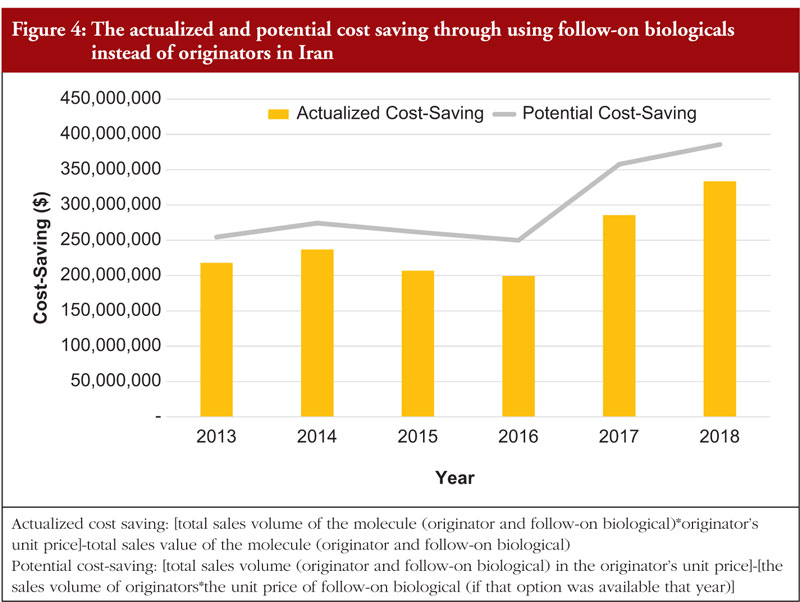 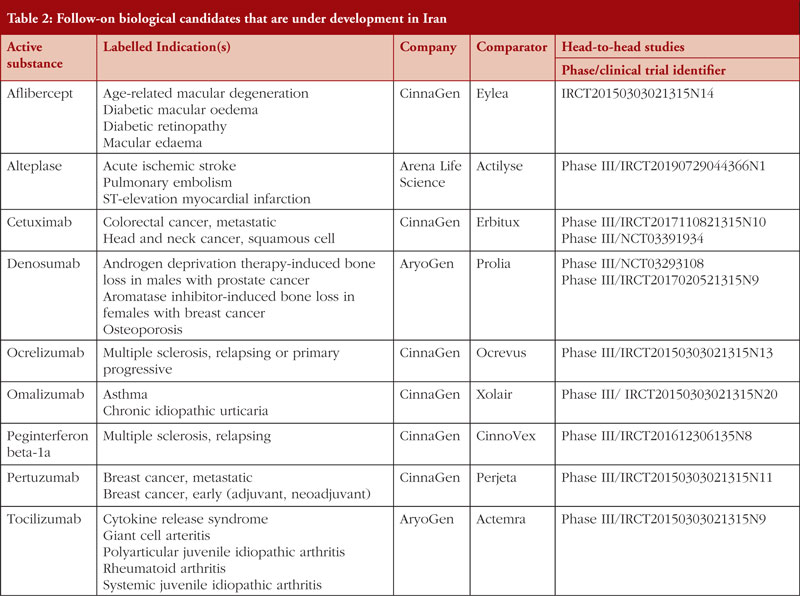 In the present study, the current status of follow-on biologicals in the Iranian market has been investigated by evaluating their ongoing and completed clinical trials. The article has highlighted that, as some products were approved as follow-on biologicals prior to the issuance of IFDA biosimilar guidance, they have not registered or published head-to-head clinical trials against the reference product. As biosimilars offer exciting therapeutic opportunities for healthcare authorities and patients in Iran in the future, all efforts should be made to ensure that true biosimilars are approved that are highly similar to reference products in terms of quality, efficacy and safety. 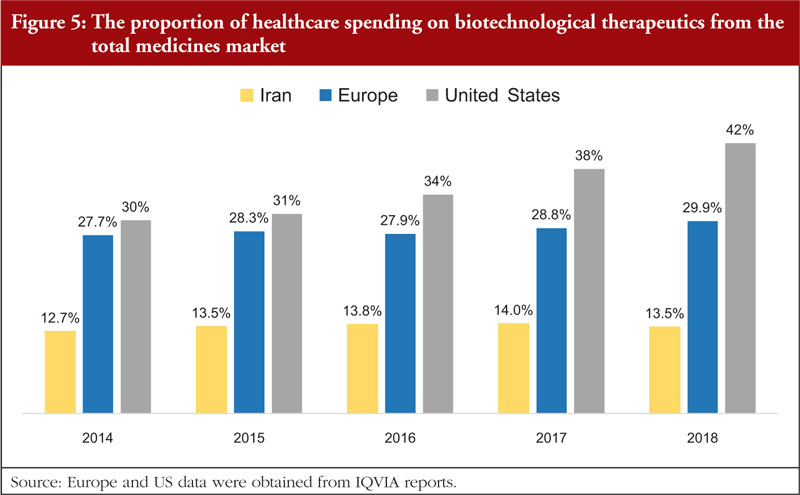 In recent years, the share of follow-on biologicals produced domestically has increased considerably in terms of sales value. At the same time, the trend of the increase in sales volume was moderate compared to sales value. This might suggest that pharmaceutical and biotechnology companies in Iran have been more willing to invest in high-value, low-volume production. This tendency is also apparent in the biosimilar candidates in the companies’ pipelines. The majority of these products are monoclonal antibodies that usually have a high unit price.

The pharmaceutical landscape of Iran has changed significantly in the past 20 years. In recent years, some biopharmaceutical companies in Iran (CinnaGen and AryoGen) have endeavoured to move towards regulated markets, such as Europe. As a preliminary step, they have acquired EU-good manufacturing practice (GMP), the certificate of GMP, that has been published on EMA’s database [6, 7]. In 2017, CinnaGen initiated pharmacokinetics (PK) and pharmacodynamics (PD) studies of its interferon beta-1a biosimilar (CinnoVex®) in Finland [8]. As such, it seems that by the development of high-quality biosimilars bolstered by satisfactory non-clinical and clinical studies, Iranian pharmaceutical companies can expand their presence in regulated and semi-regulated markets.

Although biotechnological therapeutics have offered life-saving therapies to many critical diseases, their proportional uptake in Iran has remained constant in recent years. It seems that healthcare authorities can improve patients’ access to these medicines through promoting the use of biosimilars/follow-on biologicals instead of costly originators once their quality, safety, and efficacy have been ensured. The significant cost saving associated with using biosimilars/follow-on biologicals can be allocated to helping new biotechnological medicines to be included in Iran’s drug list.

Competing interests: Farhang Rezaei and Nassim Anjidani work in the medical department of Orchid Pharmed company which is in collaboration with AryoGen Pharmed and CinnaGen companies with respect to conducting clinical trials.