Reasons for patients’ generic drug switching at the pharmacy counter: a pilot study

Drug switches between products with the same active substance occur commonly in the Netherlands and mostly between two generic drug products [1]. Drug switching should not be clinically problematic, as interchangeability is supported by the demonstration of bioequivalence [2]. However, a number of patients, physicians and pharmacists have a negative perception of generic drugs and drug switching [3], and indeed some adverse reactions related to drug switches have been reported [4]. This clinical discomfort should be avoided.

Nonetheless, generic drugs are cheaper than their branded counterparts and are therefore important to reduce the costs of pharmaceutical care. In search of an optimum balance between the clinical discomfort, some patients experience and financial benefits, patients would benefit from a system in which generic drugs have a large market share, but the number of drug switches is small. A first step towards this is to elucidate how drug switches arise.

The reasons for the occurrence of drug switches are not yet fully understood. Logically, drug shortages will result in drug switches, but other reasons can be found in the actions of health insurers, prescribers, wholesalers and/or patients, which can influence the choice of the dispensed drug product. Reasons may differ between countries as a result of legislation and healthcare ­system differences. However, in many countries, similar policies and financial incentives are in place to promote the use of generic drugs. For instance, a number of countries have tender systems in place which favour the cheaper drug product for reimbursement from a group of interchangeable drug products [5].

This study was performed in the Netherlands, where generic drugs have a large market share and there is a price-based ­tender system to promote generic drug use [6], as well as mandatory prescribing by International Nonproprietary Name (INN). The number of drug shortages has increased in the Netherlands in the last decade [7] as a result of several issues related to production, distribution and quality. The Netherlands is also a less favourable sales market compared to other countries, due to low prices and a small population size. In this study, we prospectively gathered data at the pharmacy counter, both qualitatively and quantitatively, regarding the underlying reasons for drug switching in the Netherlands.

Observational field research was conducted in pharmacies in the Netherlands during November and December 2019. A total of 400 pharmacies were approached from the database of the Utrecht Pharmacy Practice network for Education and Research (UPPER) [8]. Pharmacies were selected on the basis of geographical spread and with a maximum 2-hour travel time from the city of Utrecht. The research protocol was approved by the UPPER Institutional Review Board.

Drug switches were recorded on a paper form by one researcher (MH) at each pharmacy’s counter, for one working day. A drug switch was defined as the replacement of a patient’s drug product with a drug product containing the same active pharmaceutical ingredient, at the same strength, in the same dosage form and with the same route of administration, but from a different manufacturer (branded or generic). Drug switches for drugs destined for home delivery or storage in the pharmacy’s service lockers were included in the study, whereas pre-packed and pre-sorted packets for polypharmacy patients were excluded from the study for reasons of practicality. The researcher used software embedded automatic notification systems at each pharmacy where possible, but was also dependent on pharmacy personnel to report drug switches manually.

Pharmacy characteristics (predominant healthcare insurer, ownership status) were recorded. Per drug switch, the reason, INN, dose, manufacturer, and the patient’s health insurance company were recorded. Pharmacists were interviewed regarding their view on drug switching and the reasons behind drug switching. Simple descriptive statistics were performed with Microsoft Excel and R.

Nationwide shortages were identified from Farmanco – the drug shortage report system from the Dutch Pharmacists Association – which lists manufacturer confirmed shortages lasting longer than 14 days [9]. If a drug switch was due to a drug shortage that was neither a result of local pharmacy practice nor described in Farmanco then the reason for the switch was considered to be the result of a distribution issue at the wholesale level.

Out of 400 approached pharmacies, 19 were willing to participate (4.8%). Of these, for 16 pharmacies visits could be scheduled and were included in the study. These pharmacies differed by the predominant health insurance companies: Zilveren Kruis/Achmea (6), Menzis (4), Zorg en Zekerheid (3), VGZ/CZ (2) and Salland (1), and by ownership: pharmacy chain (4), franchise (5), independent (7). 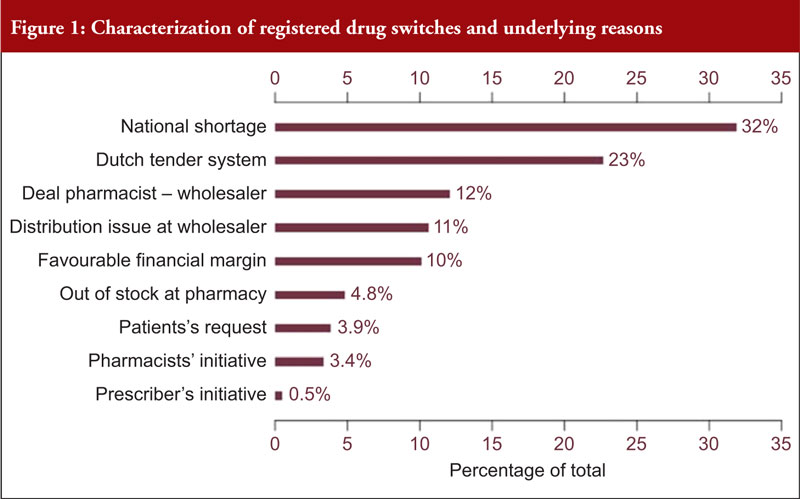 To our knowledge, this study is the first to investigate reasons for the occurrence of drug switches in the Netherlands. In our sample, we found that the two main reasons for drug switching are nationwide drug shortages and the price-based tender system, which, combined, were responsible for approximately 55% of the drug switches we observed.

It could be argued that distribution issues at wholesalers and stock issues at the pharmacy should also be classified as shortages, which would make shortages responsible for 47% (98/207) of the total number of drug switches we observed.

Economic drivers also contribute to drug switches and were identified as reasons for switching in 22% of cases in this study, including deals between pharmacist and wholesalers (12%) and financially favourable margins related to reimbursement (10%).

This study has some limitations, including the small sample size, which could impact the generalizability of the results. In addition, pharmacy visits were only conducted in the months of November and December, while the influence of the Dutch tender system on drug switching is likely bigger in January to March [1]. Future studies could include a larger number of pharmacies and include visits spread throughout the year. However, because we aimed to study the entire range of reasons for drug switching, the research period was still deemed adequate and perhaps more sensitive to issues other than the Dutch tender system.

This study presents an exploration of the complex reasons for drug switching in the Netherlands, which are, in some cases, related to policies or market structure specific to the Netherlands. Nonetheless, these findings are of international relevance. The search for an optimized drug market system, in which generic drugs simultaneously have a large market share but a low number of drug switches, is not restricted to the Netherlands. Moreover, policies and financial incentives, such as mandatory INN prescribing and price-driven tender systems for drug reimbursement, are implemented in many countries. They would therefore likely result in a similar number of drug switches and similar reasons for those switches. Policymakers worldwide could thus utilize the results of our study. The results should also open up a discussion about the acceptability of economic or distribution issues underlying drug switches, which may result in clinical discomfort for patients. This is, however, a difficult discussion, as the issues are unlikely to be easily solved and influence the financial viability of the pharmaceutical market.

No external funding was received for this research project.

The opinions in this manuscript are only those of the authors. This manuscript is not intended to reflect the opinion of the Medicines Evaluation Board in the Netherlands nor any of the working parties or scientific committees of the European Medicines Agency.

The protocol for this research was approved by the UPPER Institutional Review Board of the division of Pharmacoepidemiology and Clinical Pharmacology of Utrecht University, the Netherlands. For each participating pharmacy, a written informed consent was provided by the head pharmacist.

What is already known about this subject:
– Switching between (generic) drugs of the same active substance results in adverse drug reactions
– Drug switching occurs frequently in Dutch pharmacies [1]

What this study adds:
– Knowledge of the reasons for drug switches to occur in the Netherlands
– Evidence to support discussion on policy interventions aiming for a reduction in the number of drug switches