The introduction of biologicals has revolutionized the treatment of immune-mediated diseases such as rheumatoid arthritis (RA) [1]. However, in many countries, patient access to these agents is restricted due to their high costs [2, 3]. Biosimilar drugs offer a potential solution to this problem, with such drugs generally proving to be cheaper than the corresponding biological reference products (RPs).

Infliximab is an anti-tumour necrosis factor (TNF) monoclonal antibody that is widely used in the treatment of RA and other immune-mediated diseases [4]. A biosimilar of infliximab RP called CT-P13, also known as Remsima or Inflectra, is now approved in Europe, the US and elsewhere for use in all indications for which the RP (Remicade) is licensed, including RA. As recently reported in the journal Arthritis Research & Therapy, the phase III clinical trial PLANETRA has provided important data that supported these regulatory approvals of CT-P13 [5].

PLANETRA enrolled 606 patients with RA from 19 different countries who were then randomized to receive either CT-P13 or the RP for up to 54 weeks. Clinical efficacy was assessed via American College of Rheumatology (ACR)20, ACR50 and ACR70 response rates. Disease activity was measured using a variety of different measurements, including Disease Activity Score in 28 joints (DAS28), Simplified Disease Activity Index (SDAI), Clinical Disease Activity Index (CDAI), and European League Against Rheumatism (EULAR) responses. Patient-reported outcomes (PROs), pharmacokinetics (PK) and safety were also assessed [5].

The clinical efficacy of CT-P13 and the RP over the 54-week study was comparable, with similar ACR20, ACR50 and ACR70 responses obtained throughout the course of the study and at completion, see Figure 1. DAS28, SDAI and CDAI scores all decreased over time, with similar reductions observed for CT-P13 and the RP. Likewise, the proportion of patients reporting a good or moderate EULAR response was comparable for both treatments throughout the study. All PROs had improved from baseline by week 14 and improvements were maintained in both treatment groups for the remainder of the study period. No significant differences in immunogenicity, safety or PK were detectable between CT-P13 and the RP [5]. 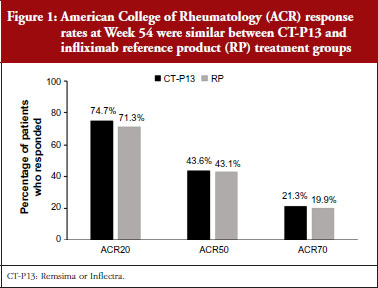 The results of PLANETRA reported that CT-P13 is comparable to the RP in the treatment of RA for up to 54 weeks, in terms of efficacy, PK and safety [5]. An extension study which ran up to 102 weeks also showed that the efficacy and safety of treatment were unaffected when patients previously treated with the RP were switched to CT-P13 [6].

The size of the biosimilar market is set to increase rapidly over the coming years as more and more biologicals come to the end of their patent terms. An increasing number of countries recommend using the least expensive drug to treat conditions such as RA, and biosimilars are typically offered at a lower price than their RPs. Therefore, clinical studies such as PLANETRA will become increasingly important in guiding clinical decision-making in order to reduce healthcare costs and increase patient access to biological therapies.