A review of generic medicine pricing in Europe

Generic medicines are a key instrument for governments to sustain their healthcare systems and control pharmaceutical expenditures. This contribution of generic medicines to the sustainability of European healthcare systems has been recognised by the High Level Pharmaceutical Forums, ‘Generic medicines provide an opportunity to obtain similar treatments at lower costs for patients and payers, while liberating budgets for financing new innovative medicines’ [1]. WHO also emphasises the cost-saving potential of switching consumption from originator products to generic equivalents [2].

Studies were identified by searching PubMed, Centre for Reviews and Dissemination databases, Cochrane Database of Systematic Reviews, and EconLit, up to August 2011. Additionally, the bibliography of included studies was checked for other relevant studies. Search terms included pharmaceuticals, generic medicines, Europe, pricing, policies, regulation, market, competition, reference pricing claw-back, tendering, discount and rebate alone and in combination with each other.

Generic medicine pricing
Price levels
Professor Simoens conducted an international comparison of ex-manufacturer prices of generic medicines in ambulatory care in 2005 [3]. Data on generic medicine prices of 15 molecules/strengths were derived from IMS Health. The analysis was limited to medicines in immediate release, oral, and solid dosage forms. Prices were compared between nine European countries (Belgium, Denmark, France, Germany, The Netherlands, Norway, Spain, Sweden and UK) and with India. India was included because the European generic medicines industry has been facing competition from Indian firms which benefit from lower labour and production costs, and weaker patent protection laws.

Ex-manufacturer prices, i.e. the price at which a pharmaceutical company sells medicines, for generic medicines varied substantially between European countries. For instance, generic medicine prices in the Scandinavian countries were substantially lower than prices in countries such as France, Germany, The Netherlands or UK. Such European variation suggests that the prices of generic medicines not only reflect underlying production costs, but are also influenced by the domestic regulatory environment surrounding registration, pricing, reimbursement and distribution of generic (and originator) medicines. This illustrates the importance of domestic healthcare policies in the pricing strategies of manufacturers. For instance, the introduction of the ‘manufacturer’ and ‘wholesaler’ schemes in UK in 2005 (which purported to increase generic medicine pricing transparency) reduced generic medicine prices by 32% in the first year following policy implementation [4, 5]. 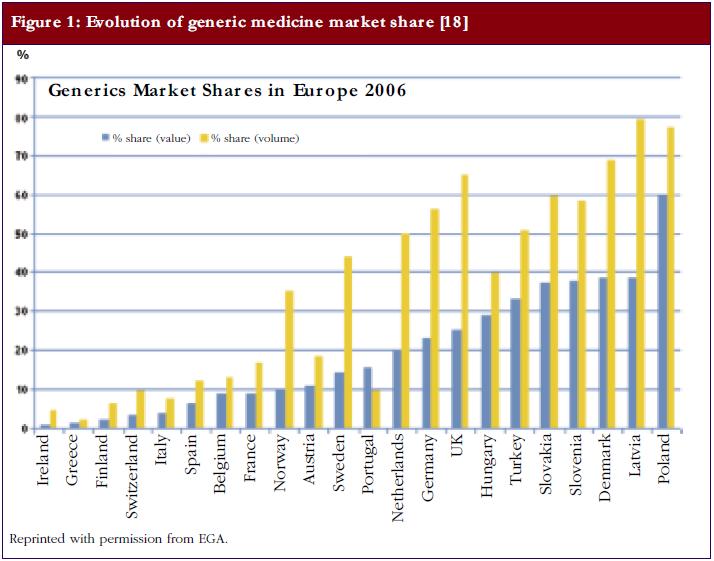 The mechanism of price regulation may also have an impact on the extent to which price competition takes place and, hence, can influence generic medicine pricing. A Norwegian study has reported that a reference pricing system, i.e. a system where the regulator establishes a common reimbursement level for a group of interchangeable medicines, stimulated generics competition to a greater extent and led to lower prices than did price-cap regulation, i.e. a system where the regulator sets a maximum price that can be charged for a medicine [19]. The recent literature suggests that mechanisms to regulate prices such as price caps or a reference pricing system reduce prices of originator and generic medicines and may encourage price competition beyond the price reductions imposed by regulation in some countries, e.g. Austria, Lithuania [11, 12], but not in others, such as Slovenia or Spain [20].

By calculating the reference price as a function of the prices of existing medicines, generic medicine manufacturers may have an incentive to compete, thereby driving down (reference) prices of medicines [22]. Nevertheless, it should be noted that competition does not exist in all countries that have adopted this mechanism of setting reference prices. Therefore, in addition to setting reference prices as a function of the prices of existing medicines, some countries have established a fixed minimum price difference between generic and originator medicines, e.g. France, Italy and Portugal [8]. This approach has the benefit of guaranteeing savings to the third-party payer, although it is not clear at what level maximum prices of generic medicines need to be set. The third-party payer will lose out if reimbursement prices of generic medicines are established at a higher level than would have been observed in a competitive market [22].

Discounting
In some European countries, competition between generic medicine manufacturers takes the form of discounting to the distribution chain rather than price competition. Indeed, two studies found that generic medicine discounts ranged from 20–70% off the wholesaler selling price in France and maximum discounts exceeded 50% of the Drug Tariff price in UK [23, 24]. Retail prices overestimate the value of generic medicines if generic medicines manufacturers compete by offering discounts to the distribution chain. This is because retail prices do not take these discounts into account. In the author’s opinion, the practice of discounting is not clear to market actors and is not fair as wholesalers and pharmacists are not rewarded for services rendered, but rather for their ability to negotiate discounts on artificial prices [22].

Such a system may financially benefit wholesalers and pharmacists, but it is not sustainable in the long run given that countries increasingly compare prices across Europe and given that healthcare payers and patients do not capture the potential savings from a generic medicines market where companies compete on price [25]. In response to this, France has regulated the size of discounts awarded in the distribution chain [24] and The Netherlands has introduced claw-back mechanisms that aim to recover the discounts that pharmacists receive. The introduction of the ‘Manufacturer’ and ‘Wholesaler’ schemes in UK made the manufacturing costs and discounts more transparent, leading to lower prices for generic medicines [5].

However, this type of government intervention is unlikely to be as efficient as a market mechanism where generic medicine manufacturers compete on the basis of prices rather than discounts to the distribution chain. Price competition between generic medicines manufacturers is transparent and easy for all market actors to understand, and ensures that prices paid by healthcare payers and patients reflect value [15]. For instance, Poland will introduce legislation in 2012 that outlaws discounting to the distribution chain and promotes price competition. However, such legislation also needs to address the issue of pharmacist remuneration as pharmacists are likely to lose an important source of income if discounts are outlawed.

Tendering
Tendering is a mechanism whereby a purchaser buys medicines based on a competitive bidding process where the contract is granted to the pharmaceutical supplier who offers the best bid following strict criteria [26]. Whereas tendering procedures are widely used in the hospital sector, in the last couple of years they are also being rolled out in ambulatory care in an increasing number of European countries with a view to constraining pharmaceutical expenditure [27]. Few data are available to date on the current status and impact of tendering procedures in Europe.

The literature suggests that significant pharmaceutical budget savings can be achieved from tenders, but the overall results are unclear [28]. One study pointed to pharmaceutical budget savings as a result of significant reductions in medicine prices in Denmark, Germany and The Netherlands [29]. However, although physicians and patients have incentives (in the form of lower patient co-payment) to demand medicines that are included in the tender in Germany, physicians still have the right to write ‘do not substitute’ on the prescription form. Furthermore, the Belgian experience indicates that tendering produced savings for one specific medicine, but these savings were offset by the fact that physicians switched their prescribing patterns to medicines with a similar therapeutic indication that did not fall under the tendering procedure, so-called ‘re-allocation of demand’, and total expenditure actually increased [30].

Countries that have implemented tendering procedures have sometimes witnessed a decrease in pharmaceutical investments, a slowdown in the development of the generic medicine market, short-term absences of some medicines due to logistic shortages, a reduction in pharmacist remuneration, and problems with patient compliance [29]. Finally, tendering systems in countries such as Germany are regionally based and are initiated between individual sickness funds and pharmaceutical companies and, therefore, are less transparent than in countries such as Belgium, which has a national tender.

One Response to A review of generic medicine pricing in Europe