Data requirements to demonstrate biosimilarity in the EU

The European Union (EU) was the first to establish a legal framework and guidance for biosimilars. The legal framework for approving biosimilars in the EU was established in 2003. This framework means that biosimilars can only be approved centrally via the European Medicines Agency (EMA) and not nationally [1]. The agency first developed guidelines for the approval of biosimilars via an abbreviated registration process during 2005 to 2006, and since then has developed many general and specific guidelines for biosimilars [2]. The initial approach by the agency was science-driven, but with no practical experience a cautious, conservative approach to biosimilars was adopted.

Since those early days EMA has issued new guidelines and updated its existing guidelines based on new evidence and rapid advances in analytical sciences. For example, the sensitivity of mass spectrometry methods to detect peptides has increased rapidly over the past two decades. The detection limit for peptides back in 1990 was only 100 pmol compared to 0.00001 pmol in 2011; representing a 10 million-fold increase in sensitivity in 20 years. The agency has also incorporated learning from both manufacturing process changes and biosimilar product reviews.

In her presentation [3], at the 14th Annual European Biosimilars Group Conference, Dr Martina Weise, Head of Licensing Division at the Federal Institute for Drugs and Medical Devices (BfArM), discussed biosimilars applications reviewed by EMA and the evolving landscape on data requirements to demonstrate biosimilarity in the European Union.

Since EMA started reviewing applications for biosimilars, and up to April 2016, the agency had received 44 marketing autho- rization applications (MAAs). Of these, 13 were still under review and seven had been withdrawn (six for insulin biosimilars and one for an epoetin biosimilar). Up to April 2016 the agency had given a positive opinion for 22 MAAs [of which two were later withdrawn (filgrastim and somatropin)] and a negative opinion for two MAAs (interferon alfa and insulin), see Figure 1. 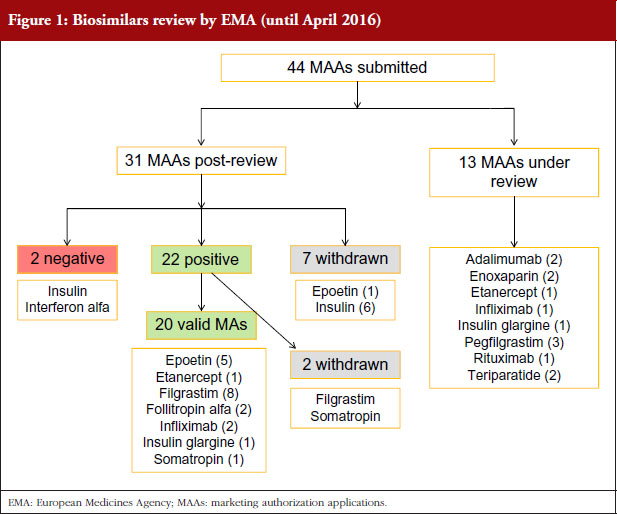 In May 2016, the infliximab biosimilar Flixabi received approval in the EU [1]. In November 2016, EMA’s Committee for Medicinal Products for Human (CHMP) gave a positive opinion for the teriparatide biosimilars, Terrosa and Movymia, and for the insulin glargine biosimilar Lusunda [4].

One major change with respect to reference products is that a reference product not authorized in the European Economic Area1 (EEA) may be used for certain clinical and in vivo non-clinical studies if it was authorized based on similar scientific and regulatory standards as those used by EMA and if it is representative of the reference product in the EEA [5]. This is outlined in EMA’s Guideline on similar biological medicinal products (CHMP/437/04 Rev 1. Effective date: 30 April 2015) [2].

Requirements for reference products in the EU and US are comparable.

No factual changes have been made, but the guidance, which was updated in December 2014 [2], has been made clearer.

According to Dr Weise, the clinical programme for a biosimilar is not intended to show efficacy and safety per se. The endpoints should be sensitive to detect differences in efficacy and may be different from those used in clinical trials with the originator. There has been a clear shift to PD endpoints, examples include:

EMA does not require a full clinical dossier for a biosimilar. It is usually possible to carry out one clinical trial in one indication, with the option to extrapolate to other indications of the reference biological.

Regarding extrapolation2 of indications for biosimilars, EMA has stated that ‘if clinical similarity can be shown in a key indication, extrapolation of efficacy and safety data to other indication(s) of the reference product may be possible’ under certain conditions [1].

In her presentation, Dr Weise explained that extrapolation:

New pharmacovigilance legislation was adopted by the European Parliament and European Council in December 2010. EMA is responsible for implementing the legislation. As part of its commitments the agency released draft guidance on pharma­covigilance for biologicals in December 2015 for public consultation. This guideline has since been finalized and came into effect in August 2016.

The guideline outlines the following:

Dr Weise concluded that ‘EMA has shaped biosimilar development globally’, with ‘10 years of safe and effective use of bio­similars in the EU’. Meanwhile the agency is increasingly ‘moving from a science-­based concept to a science and experience-based approach’. This, accompanied by the ‘increasing armamentarium and sensitivity of analytical tools allows increased tailoring and reduction of clinical programmes’. Finally, she added that global development is ‘desirable’ but warned that ‘complete alignment of scientific thinking and data requirements may not be achievable’.