Interchangeability of biosimilars in the US and around the world

There is a lack of harmonization around the world when it comes to how different countries or regions approach interchangeability of biosimilars [1].

In the US interchangeability is defined in law as part of the Biologics Price Competition and Innovation Act of 2009 (BPCI Act) as:

The US Food and Drug Administration (FDA) may approve a product as interchangeable, see Table 1, although individual states control the act of pharmacy-level substitution. The agency issued draft guidance on biosimilar interchangeability in January 2017 [2] and more recently extended the comment period on the guidance [3]. Twenty-five US states have passed legislation addressing biosimilar substitution [4]. 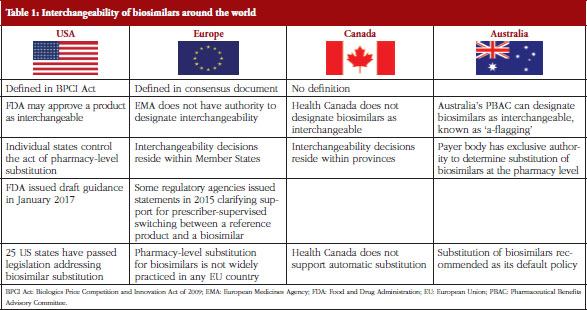 The European Commission has defined interchangeability in a consensus information document on biosimilars [5] as:

‘the medical practice of changing one medicine for another that is expected to achieve the same clinical effect in a given clinical setting and in any patient on the initiative, or with the agreement of the prescriber’.

In the European Union (EU), decisions on the interchangeability or substitution of biosimilars and originator biologicals are not made by the European Medicines Agency (EMA), but at the national level, see Table 1. This is the case, despite the fact that biosimilars developed in line with EU requirements are considered by EMA to be therapeutic alternatives to their reference biologicals.

In Canada, where biosimilars were previously referred to as subsequent entry biologics (SEBs), the medicines regulatory agency Health Canada has not defined interchangeability for biosimilars, but has stated that:

‘SEBs are not generic biologics … authorization of an SEB is not a declaration of pharmaceutical or therapeutic equivalence to the reference biologic drug’.

Health Canada does not designate biosimilars as interchangeable and does not support automatic substitution, see Table 1. Decisions on interchangeability are made at the provincial level.

Decisions on ‘a-flagging’ are, however, made on a case-by-case basis. The PBAC has permitted substitution (‘a-flagging’) of biosimilars of infliximab and etanercept [6] but not biosimilar follitropin.

In the US, FDA has different requirements for biosimilars depending on whether they are defined as ‘biosimilar’ or ‘interchangeable’.

FDA issued draft guidance on the interchangeability of biosimilars in January 2017 [2]. In the guidance, the agency makes it clear that biosimilar makers will first have to prove that their product is ‘biosimilar’ to the reference biological. Then, in order to claim ‘interchangeability’ for the biosimilar, additional information must be submitted.

For biosimilarity the product must:

For interchangeability the following principles apply:

Twenty-five US states and Puerto Rico have passed legislation relating to interchangeability of biosimilars [4].

Most of the state legislation uses compromise language for automatic substitution of biosimilars, which has been supported by both originator and biosimilar medicines makers and was unveiled by the Generic Pharmaceutical Association (GPhA) in 2014. The compromise language requires the dispensing pharmacist to ‘communicate to the prescriber the specific product provided to the patient, including the name of the product and the manufacturer’ ‘within a reasonable time’. Critical points are that the wording does not specify the notification period, and states that the communication is to be done via the use of an electronic system where possible – thus reducing any delays for patients and reducing the burden on pharmacists [7].

The lack of harmonization for the interchangeability of biosimilars across the world introduces confusion for stakeholders and developers possibly delaying access to life-saving treatments.