The market uptake of biosimilars in the US and worldwide will depend on regulatory policies [1], for which an agreed naming and labelling system will be important [2]. A survey of the views of European physicians on familiarity of biosimilar medicines demonstrated the need for distinguishable non-proprietary names to be given to all biologicals [3]. This has been supported by a number of discussions surrounding the development of clear regulation in this area [4–7], and a number of countries across the globe from Latin America [8, 9], Australia [10] and beyond; have called for specific nomenclature to be developed. The results of these surveys reinforce the value of a global naming policy for biologicals and the importance of the World Health Organization (WHO) moving forward with its biological qualifier proposal.

Since the US Food and Drug Administration (FDA) has only distributed draft guidance on the naming of biological medicines [11] and biosimilar labelling [12, 13], feedback from the pharmacists who prepare and dispense them is also important in determining how these drugs are regulated. In Europe, product labelling is seen as important to build user confidence in biosimilars [14]. In response to concerns in Europe, the Alliance for Safe Biologic Medicines (ASBM) invited 3,525 pharmacists in the US to complete a survey that included questions related to the information that could be included in a label, such as whether or not the product was a biosimilar; what analytical/clinical data and clinical similarity data should be present; post-marketing data; approved and non-approved indications; data source; and whether or not it was interchangeable/substitutable.

FDA has proposed a new policy that would require every biological – whether originator or biosimilar – to have a distinct non-proprietary scientific name. Both pharmacists and prescribers concluded that FDA was right to require a distinct non-proprietary scientific name for every biological product – originator or biosimilar – that FDA had approved.

In 2015, the ASBM invited 3,525 pharmacists in the US to complete a survey on the naming of biological medicines and biosimilar labelling [15], including feedback on FDA draft guidance on non-proprietary biologicals naming [11]. A total of 849 pharmacists replied (a response rate of 24%). Of these, 448 pharmacists were screened out predominately for their lack of knowledge on biologicals or did not complete the survey. A total of 401 pharmacists (11.4% of all those invited) completed the survey, and are collectively termed ‘respondents’. Pharmacists were reimbursed US$22 for completing the survey.

Pharmacists were recruited from a large, global panel of healthcare professionals and were either employed in a hospital/health system pharmacy (60%) or retail pharmacy setting (40%). All 401 pharmacists that completed the study had dispensed biological medicines and had been in practice as a pharmacist for one year or more, see Figure 1. 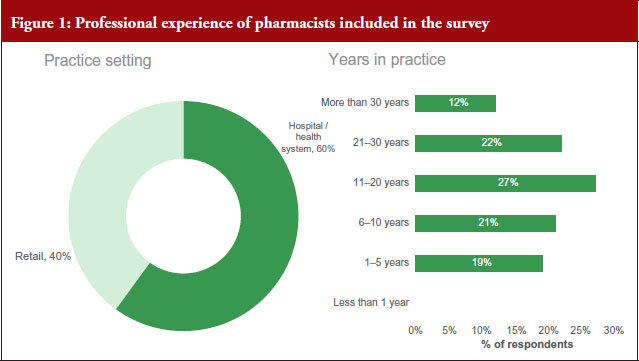 Pharmacists were asked what information they would like to see included in a biological product label in order to choose between multiple biosimilars and their reference products. Data were analysed using MS Excel, and checked manually. 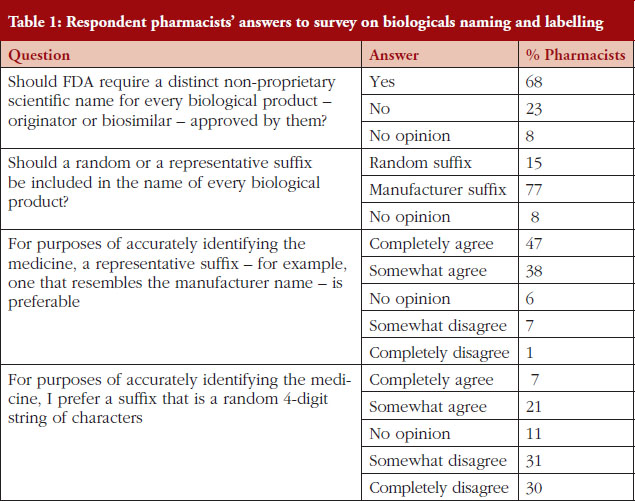 Knowledge of biosimilars
Survey participants were asked how familiar they were with biosimilar medicines with the following question:

‘Biosimilar medicines are intended to be copies of already approved biological medicines. They are referred to as “biosimilar” rather than “generic” because they will be similar, but not identical to the product they copy. How familiar are you with biosimilar medicines?’

Pharmacists were asked about their knowledge of the approval process for biosimilars using the following question:

‘Originator medicines are approved by the US Food and Drug Administration based on an evaluation of clinical data that demonstrates a medicine is safe and effective for the specified indication and data must be provided for every indication. The approval pathway for biosimilars is different than for originator medicines. Are you aware a biosimilar medicine may be approved for several or all indications of the reference product on the basis of clinical trials in only one of those indications?’

The responses suggest that overall knowledge among respondents was good with 86% answering yes (91% hospital pharmacists are more likely to respond ‘Yes’ versus 78% retail pharmacists). When asked if they thought that their understanding of the biosimilar approvals process was acceptable, there was a consensus that this was ‘acceptable’ (27%) or at least ‘somewhat acceptable’ (51%).

Naming requirements
When questioned about how biological naming should be regulated, the majority (68%) of the respondents thought that each product – originator or biosimilar – should have a distinct/unique non-proprietary scientific name. Furthermore, 77% of respondents thought the suffix on a biological medicine name should indicate its manufacturer, rather than a random suffix in future product approvals.

Biosimilar labelling
A total of 58% of respondents thought that it was very important that a product label for a biosimilar clearly indicates that it is a biosimilar. They also agreed that labels should include an explanation as to what a biosimilar is. Analytical information resulting from biosimilarity studies should be included, as should any clinical data submitted to FDA and any post-marketing data. There was also a consensus that the label should include reference to the brand name of the originator product.

The results of this survey of pharmacists are consistent with the results from a survey of physicians in Europe [3]. In both surveys, respondents believed that products sharing a non-proprietary name could be considered identical, could be expected to produce the same results, could be used interchangeably and would be approved for all the indications of the reference product.

Many of the findings in this study support a recent survey sponsored by the Academy of Managed Care Pharmacy (AMCP) [18]. In the AMCP study, more than 60% of participants (62.3%) reported preferring a biosimilar naming convention that uses either a designated suffix (48.1% of all participants) or prefix (14.2% of all participants). Of the 48.1% who would prefer a designated suffix, the vast majority (83.4%) wanted a suffix that was based on the name of the manufacturer. In this survey, 77% of pharmacists expressed a preference for a suffix based on the manufacturer.

To date, FDA is yet to finalize its guidance for the naming of biologicals and labelling of biosimilars. This is a fast-evolving area – following publication of its draft guidance in 2015 and 2016 [11, 12], FDA issued a request for comments on expanding the number of suffixes that biosimilars makers could propose. The request was swiftly withdrawn; following what FDA said was an administrative error [19]. Some have speculated that the agency wanted to extend the comment period, which was originally in July 2016.

The results from surveys like the one described here will aid in the development of a clear and comprehensive system to promote the safe and effective use of biologicals and biosimilars, and as a result facilitate consumer confidence and market uptake in the US.

The pharmacists responding to this survey reported having a good overall knowledge of biosimilars and their approval process. The results suggest that when a biosimilar and the reference product share the same non-proprietary scientific name, it could lead to confusion among pharmacists. This is because two products sharing a non-proprietary name could be considered identical, be expected to produce the same results from both drugs, be used interchangeably, and be approved for all of indications of the reference product. As these are assumptions that cannot be made with biosimilars, pharmacist respondents agreed that all biological products should have unique names and that clear and explanatory labelling of these products should be required.

In general, all issues raised with regards to labelling were considered by pharmacist respondents to be very important for label inclusion. This means that they are supportive of biosimilar products being labelled specifically as such, with the clear inclusion of what a biosimilar product is. There should also be clear information about the analytical studies and clinical studies used for the approval of the product. In cases where the biosimilar is not approved for all indications of the reference product, this should be clearly indicated where these indications are based on extrapolation of the indications approved for the reference product, and whether the biosimilar is interchangeable.