Drug budgets and total healthcare expenditure can vary between countries, but budget restrictions, even in high-income countries, such as Norway, are common to all.

When an original biological drug goes off patent, substituting treatment with biosimilars can reduce the cost of treatment. This can free up resources to treat more patients and maximize health care within a fixed budget. It can also enable cost savings to be channelled into developing new, effective treatments. It is also possible to put drugs out to tender to reduce the price of originator drugs. In Norway, the overall effect of existing biosimilars on prescriptions has varied. Why has this happened and what can we learn from this?

Biological drugs for the treatment of rheumatoid arthritis, ankylosing spondylitis, Crohn’s disease, ulcerative colitis, psoriatic arthritis and psoriasis were the first group of drugs transferred from National Insurance funding to hospital funding for drugs used outside hospitals from June 2006.

Epoetin and filgrastim are used for in-hospital treatment (paid by the regional health authority) and by patients at home (paid for by national insurance). Both active ingredients are included in a national tender for drugs used in hospitals. Tender prices of biosimilars of these two products are discounted up to 89%, with a high volume of sales to hospitals. Discounts for use outside of hospitals are around 50% for filgrastim and around 25% for epoetin, with a total market share of over 80%.

Despite these impressive discounts, sales of epoetin and filgrastim are still not comparable to sales of biological drugs that do not have biosimilar competition, such as pegfilgrastim and darbepoetin, which dominate the market, and which have benefited from successful marketing campaigns.

Purchase and delivery agreements in Norway

In Norway, the Norwegian Drug Procurement Cooperation (LIS) is responsible for providing the basis to, and specifications for, purchase and delivery agreements for pharmaceutical manufacturers in cooperation with state-owned hospitals, thereby reducing costs. The Norwegian authorities pay for the bulk of drugs through national insurance and hospitals (regional health authority budgets).

National annual tender processes for tumour necrosis factor (TNF) biosimilar drugs (infliximab) and multiple sclerosis drugs have been running at the LIS since 2007 and 2010, respectively, and a tender process for a number of oncology drugs was started in 2014. All include home and hospital treatment. A fourth tender includes ‘all other’ drugs used in hospitals.

The LIS TNF/BIO tender group includes specialists in rheumatology, gastroenterology and dermatology, a member of a patient organization and a pharmaco-economic specialist from the Norwegian Medicines Agency. The specialist group currently considers the drugs included in the tender to be clinically equal. The cost of the first year’s treatment is the criterion used for ranking the various products, separate recommendations are made for injection and infusion treatments for each indication.

The highest ranked product in each group is considered to be the drug of choice for new patients and for patients who need to change treatment. Regional health authority management supports the recommendations and use them as directives to hospitals, however, it is always possible for clinicians to deviate from the directives and use another drug based on their clinical evaluation of a specific patient. 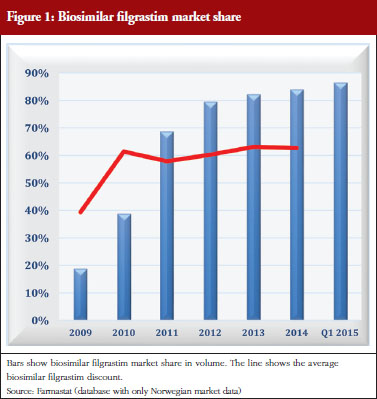 The example of filgrastim shows that different levels of discounts can be obtained with and without a tender. This situation also applies to epoetin. Tenders in the hospital segment give discounts of up to 89%, whereas discounts outside hospitals, without a tender, vary between 25% (epoetin) and 50% (filgrastim). The high discount in hospitals could be influenced by the expectation of obtaining high market share outside hospital along with higher prices. The respective market share for these two products are quite high, but it has taken several years to achieve them, see Figure 1. More competition for filgrastims and epoetins could result if the regional health authorities were responsible for funding care outside of hospitals. 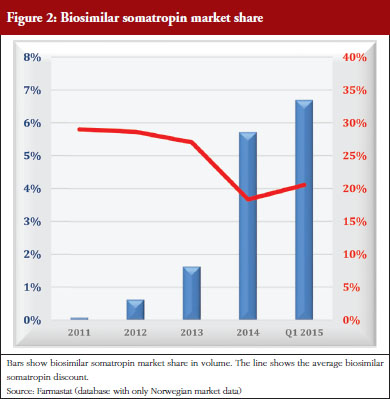 The example of somatropin shows the effect of a biosimilar entry with low discounts, little follow-up, and no requirement to use the cheapest product, resulting in low market share even after several years on the market, see Figure 2. Automatic substitution could work well for this type of product, but would be illegal under existing laws. Higher discounts will not increase sales without any requirement for biosimilar use. Stipulating use of biosimilars is difficult to enforce when funding is provided by national insurance. Transfer of funding from national insurance to regional health authorities (H-prescription) allows for somatropin to be included in a national tender. This could considerably change the market share of biosimilar somatropins and elicit higher discounts.

Biosimilar infliximab was launched in Norway in December 2013 (Remsima [Orion] and Inflectra [Hospira]). Hospitals pay for treatment at home (H-prescription and hospital prescription) and for in-hospital treatment. A national, annual tender for this group started on 1 March 2007. A ranking based on a one-year cost for each indication, calculated separately for home treatment (injection) and hospital treatment (infusion), is used to decide which recommendations are made for the treatment of new patients and for patients who need to change treatment.

As a response to this, the Ministry of Health has recently funded a study, NOR-SWITCH, to compare the innovator drug infliximab (Remicade) with the biosimilar infliximab (Remsima) after switching from Remicade. This study is designed to generate safety and efficacy data about treatment with Remsima. It is believed, however, that the announcement of the study has inhibited sales of Remsima as clinicians and patient organizations await the results, which are expected in 2016 [2]. Although preliminary experience with Remsima has been positive, patient organizations are hesitant to recommend switching until the results are published. It is unclear whether this hesitation is a result of negative industry-supported biosimilar presentations given to patient organizations. Nevertheless, positive experience in hospitals, and the considerable lower prices for Remsima, has already boosted the market share for this drug, see Figure 3. 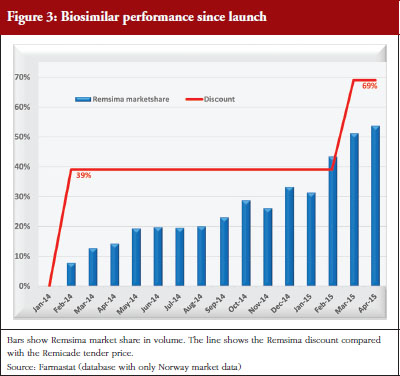 Lessons learned from the biosimilar experience in Norway

A national tender is an effective way to obtain the best prices and is feasible even in countries in which different regions have their own pharmaceutical budgets. In Norway, the system that works best to maximize biosimilar competition is the H-prescription system in which the regional health care is responsible for funding drugs used in hospitals and at home, and when all these drugs compete in a tender process. Success requires a combination of actions. The TNF biosimilar tender is an example of this approach, as it was the first H-prescription group with biosimilar competition, i.e. biosimilar infliximab.

The LIS tender process makes it easy for biosimilars to enter the healthcare system quickly if their price is sufficiently low, and to become the recommended drug for all approved indications. It also provides good ‘marketing’ through the LIS meetings and LIS contacts. This is a real advantage and opportunity for companies with limited marketing resources, often a reality for the companies marketing biosimilars, but also to other biopharmaceuticals manufacturing companies.

Biosimilar infliximab has had a more rapid penetration into the market than other biosimilars available in Norway, even though the NOR-SWITCH may have slowed down access to Remsima [2]. Several factors have contributed to this. Its low price puts Remsima at the top of the ranking for all its in-hospital treatment indications. Drug costs for in-hospital Remsima are much lower than are the drug costs for home treatment with injectable products, which can result in a larger proportion of treatments being carried out in hospitals. Specialists and hospital management both support the recommendations. LIS quickly makes information on recommendations public and widely available as described above. Close contact between specialists, clinicians, pharmacists, patient organizations and the pharmaceutical industry is an important foundation for success.

Several originator pharmaceutical companies will soon introduce biosimilars into the marketplace. They argue that this demonstrates a positive attitude of the originator industry towards biosimilars. This may be true in the future, but currently the use of biosimilars is of little or no benefit for originators, whose marketing activities in Norway over the last few years have been nominal. On the basis of these facts, what is the answer to the original question ‘What works?’ How can we design a successful biosimilar uptake strategy?

Knowledge about biosimilars is often poor, and largely based on presentations from the originator industry. Knowledge must improve. Physicians, pharmacists, payers and patient organization must receive unbiased, continuously updated information on the use of biosimilars. Health authorities must be responsible for providing this information, organizing a system that facilitates or requires the use of biosimilars when available (if regarded equally safe and effective to use), and be favourably priced. Models, such as use of preferred drug lists or provision of instructions for biosimilar use are two of many possibilities that could be useful.

Knowledge, instructions for use, tenders and a combination of actions are all needed to generate successful biosimilar uptake. Current resources are insufficient. Increased use of biosimilars may require an increase of allotted resources to generate savings that can be used to treat patients more effectively, increase the provision of health care, and even save lives.

The author wishes to thank the English editing support provided by Maysoon Delahunty, GaBI Journal Editor, for this manuscript.