Switching from the infliximab reference product to CT-P13 in patients with rheumatoid arthritis or ankylosing spondylitis: results of the PLANETAS and PLANETRA extension studies

CT-P13, also known by its brand names Remsima or Inflectra, is a biosimilar of the infliximab reference product (RP) Remicade. CT-P13 is approved in Europe, the US and elsewhere for use in all indications for which the RP is licensed, including rheumatoid arthritis (RA) and ankylosing spondylitis (AS). Approval of CT-P13 was partly based on findings from two pivotal clinical trials – PLANETAS and PLANETRA – which concluded that CT-P13 and the RP were highly comparable in terms of pharmacokinetics, efficacy, immunogenicity and safety in AS patients (PLANETAS) and RA patients (PLANETRA). Recently, data from extension phases of the original two clinical trials have been published in Annals of the Rheumatic Diseases. The data reported that it was possible to switch from the RP to CT-P13 without any detrimental effects on safety or efficacy. The studies also reported that CT-P13 was well tolerated and effective for up to two years in patients with RA and AS [1, 2].

Following the main 54-week randomized controlled trials during which patients with AS or RA received either the RP or CT-P13 [3, 4], patients were invited to enrol into 48-week extension studies. All patients who enrolled onto the extension studies were treated with CT-P13. Clinical efficacy and disease activity were assessed using a variety of different measurements, including Assessment of SpondyloArthritis international Society (ASAS) response rates (in patients with AS) and American College of Rheumatology (ACR) response rates (in patients with RA). 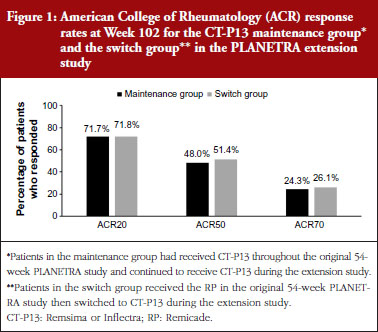 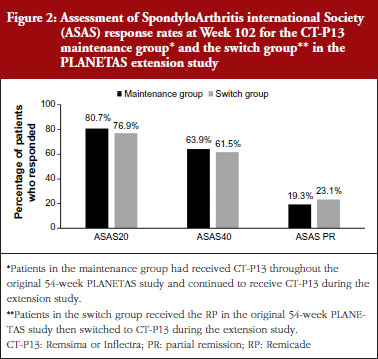 CT-P13 was well-tolerated during both extension studies, with a safety profile that was consistent with that of the RP [5, 6]. The proportion of patients developing anti-drug antibodies was also similar in the maintenance and switch groups in either extension study.

As patent expiration dates loom for many biological drugs, there is increasing interest in the development of biosimilar drugs. With tight healthcare budgets, many countries commonly recommend the least expensive drug be used for treating conditions such as RA and AS [7, 8]. With biosimilars typically being less expensive than originator biologicals [9], studies that examine whether patients can be switched from the originator biological to a biosimilar are vital to aid clinical decision-making. Switching to the biosimilar may lead to cost savings and increased access to treatment for more patients with these debilitating diseases.