Update on US state legislation on biosimilars substitution

The Biologics Price Competition and Innovation (BPCI) Act of 2009 was signed into law on 23 March 2010 by President Barack Obama. The BPCI Act establishes an abbreviated approval pathway for biological products that are demonstrated to be ‘highly similar’ (biosimilar) to, or ‘interchangeable’ with a US Food and Drug Administration (FDA) approved biological product.

In the US, FDA, under the BPCI Act, has the authority to designate a biosimilar as interchangeable. The term ‘interchangeable’ is used in the US as a scientific designation to indicate that FDA has made a scientific determination that the product ‘can be expected to produce the same clinical result as the reference product in any given patient’, and for products administered more than once to an individual, ‘the risk in terms of safety or diminished efficacy of alternating or switching between the biological product and the reference product is not greater than the risk of using the reference product without such alternation or switch’. The European Medicines Agency (EMA) does not have the authority to evaluate a product for its safety in terms of repeated switching1.

On 28 April 2015, FDA released three final biosimilars guidances [1] and US states are now contemplating substitution of interchangeables biosimilars [2]. This follows the agency giving marketing authorization to its first biosimilar on 6 March 2015 [3]. Sandoz’s Zarxio (filgrastim-sndz) injection became the first biosimilar ever to be approved in the US, for five of the indications for which the US-licensed originator biological, Neupogen, is approved. In anticipation of such an approval, many US states have been considering, or have introduced, laws related to the substitution of biosimilars at the pharmacy level [4].

Most of the proposed legislation requires the retail pharmacist to communicate to the prescribing physician the identity of the product dispensed if an interchangeable product is available, regardless of which product (brand-name or interchangeable) was dispensed.

Compromise language developed by both biosimilar and originator manufacturers is supported by more than 20 companies and organizations, including the Biotechnology Industry Organization (BIO) and the Generic Pharmaceutical Association (GPhA). The compromise proposal requires the dispensing pharmacist to ‘communicate to the prescriber the specific product provided to the patient, including the name of the product and the manufacturer’ ‘within a reasonable time’. It does not require the pharmacist to wait for approval from the physician and thereby reduces any delays for patients. An option to provide the information via an interoperable electronic system, such as a prescribing system, also reduces the burden on pharmacists [5].

Biosimilar substitution bills, including those with physician notification after the product had been dispensed, began appearing in US states in 2013. Opposition came from manufacturers of generics and from organizations representing pharmacists, who objected to the extra workload communication requirements might entail. However, now a new batch of bills is appearing, many using the newly proposed ‘compromise wording’.

Communication periods vary from within 24 hours after dispensing in North Dakota to within 10 days in New Jersey. Record keeping is also a part of many of the proposed bills, with the length of time that records of biosimilars substitution have to be kept varying from two to 10 years as is consistent with each state’s policy for generics.

Virginia has also passed a biosimilar substitution law, but with a sunset clause on the prescriber communication provision, which expires on 1 July 2015. The state is currently considering an extension to the clause, see Table 1. 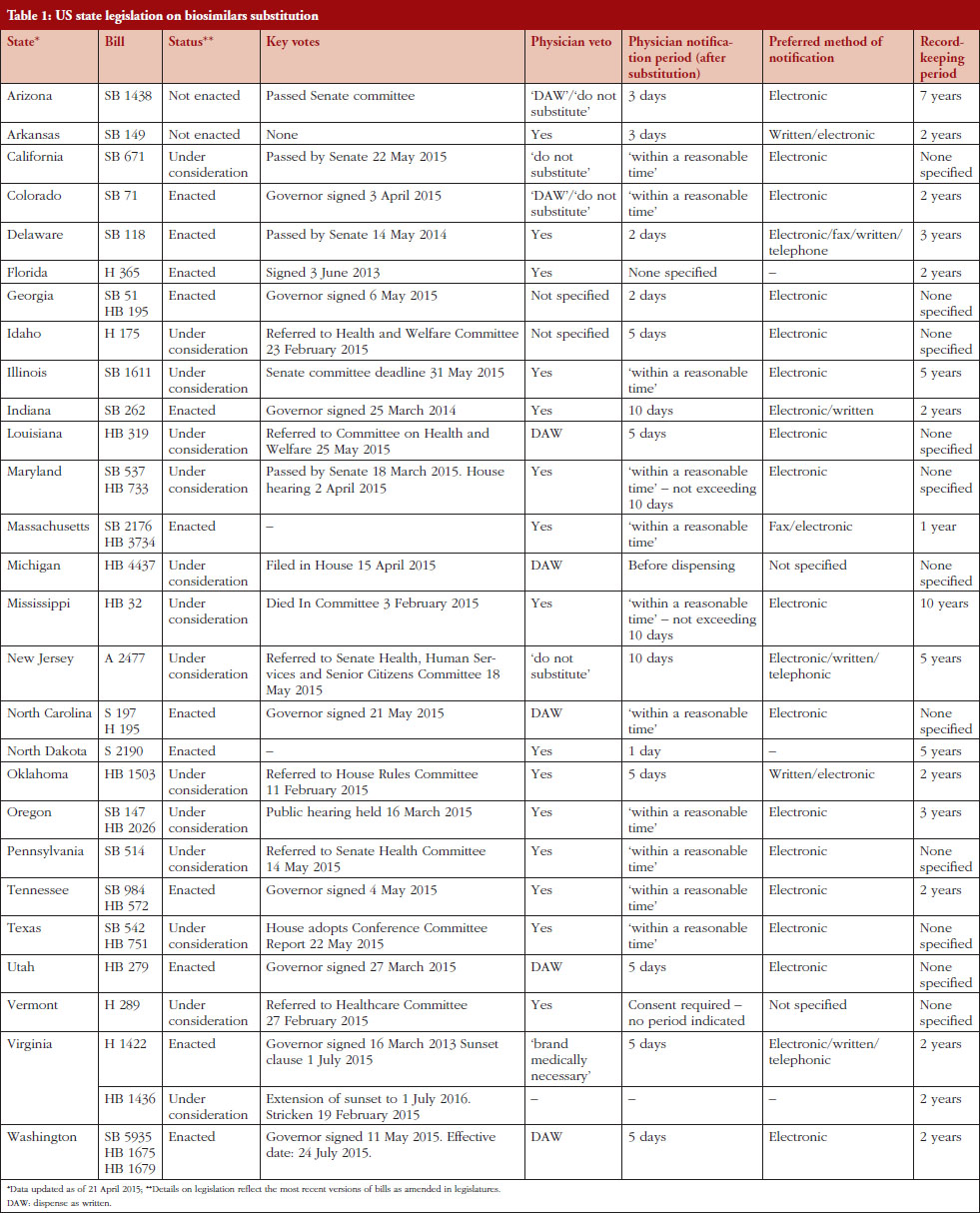 The wording in the different state legislation varies, but, where a time limit for prescriber communication is specified, it is similar to that of Utah:

‘Within five business days following the dispensing of a biological product, the dispensing pharmacist or the pharmacist’s designee shall make an entry of the specific product provided to the patient, including the name of the product and the manufacturer. The communication shall be conveyed by making an entry into an interoperable electronic medical records system, through an electronic prescribing technology, a pharmacy benefit management system, or a pharmacy record that is electronically accessible by the prescriber. Entry into an electronic records system as described in this Subsection (8) is presumed to provide notice to the prescriber.’

For the ‘compromise wording’ the text in the bills is similar to that of Colorado: