As both clinical experience and real-world evidence increases, knowledge sharing and identifying best practices can support the appropriate use of biologicals, including biosimilar medicines. Gianluca Trifirò, Assistant Professor of Pharmacology at the University of Messina and a Clinical Pharmacologist in the Unit of Clinical Pharmacology of the Academic Hospital ‘G. Martino’ of Messina, Italy provided an update of the latest available clinical experiences with biosimilar medicines in Italy, focusing on switching between biological medicines and interchangeability. He provided clarity on the European Crohn’s Colitis Organisation (ECCO) position on the use of biosimilars for inflammatory bowel disease (IBD) and discussed the challenges ahead [1, 2].

Professor Trifirò discussed the issue of stakeholder confidence from the perspective of physicians in Italy. He reported the results of a survey of 816 Italian physicians including their experience with regional or national drug policies and how this has affected their prescribing behaviour.

In addition, Professor Trifirò presented the conclusions of an updated position statement from ECCO on the use of biosimilars for IBD. He concluded his presentation by looking at the future challenges facing biosimilar uptake in Italy and worldwide and how these challenges should be met.

Professor Trifirò presented the results of a survey involving 816 physicians in Italy [3] and which was coordinated by Cittadinanzattiva that is a non-profit organization which is aimed at promoting civic participation and protection of citizens’ rights in Italy. The survey questionnaire was developed in a roundtable with representatives of several Italian scientific societies and patient and physicians organizations. The same roundtable participants distributed the survey questionnaire electronically using the web platform ‘esurveypro’ through a dedicated link through mailing, newsletter, Internet and participation at events and conventions.

The physicians, who worked across a range of specialties, see Table 1, were asked whether the way that they prescribe medicines was influenced by regional or national drug policies. 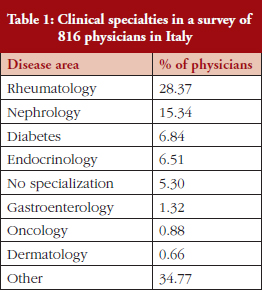 Physicians were asked whether they had ever prescribed a medicine that they did not consider was the best available option in order to conform to regional or national drug policies, see Figure 1, there was no response for ‘Always’. 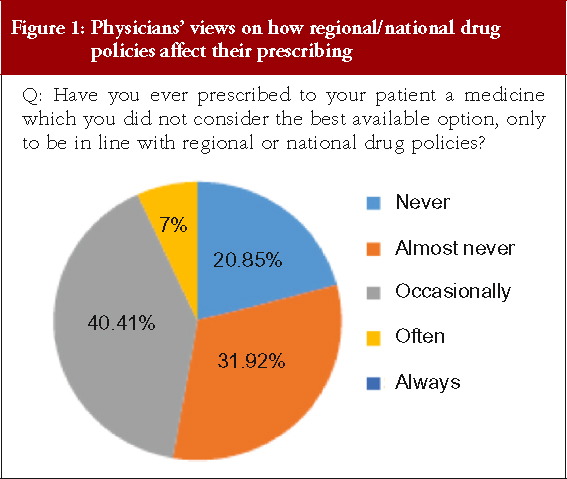 ECCO position statement on the use of biosimilars for IBD

Professor Trifirò presented a position statement on the use of biosimilars for IBD released in 2017 by ECCO [1, 2]. The statement is the result of a consensus meeting held on 15 October 2016 and is based on the current regulatory guidance from the European Medicines Agency and evidence about efficacy and safety of biosimilars in IBD patients, see Box 1.

Several challenges for the future of bio-similars were identified. Establishing an effective system of pharmacovigilance will be key. The first challenge highlighted by Professor Trifirò will be to explore comparative long-term safety and effectiveness of first generation biosimilars thanks to data that have been cumulated over time. As experience with biosimilars grows, it will be important to evaluate clinical effects of switch between originator and biosimilars and vice versa, and between different originators.

Alongside these challenges, the secondary use of healthcare databases for post-marketing surveillance needs to be considered also for second-generation biosimilars in cancer patients.

While promoting the use of low cost biologicals, warned Professor Trifirò, prescribing biologicals wisely remains the highest priority over cost considerations. Every stakeholder (payers, healthcare professionals, patients) needs to be involved in the collection of real-world evidence about biosimilars that has to be integrated with pre-marketing evidence from randomized clinical trials [4].

Professor Trifirò concluded by noting that, given the growing number of biosimilars to be marketed in the near future across several different therapeutic areas, an international post-marketing surveillance system specifically for biosimilars must be established [5].