Biosimilars are recognized around the world as safe and effective medicines. Despite this fact, they are still relatively new to most countries and make up only a small part of the biologicals market. The growing demand for ‘life-changing’ biologicals, however, is fuelling their growth.

Biosimilars regulations in Japan were issued by Japan’s regulatory authority, the Ministry for Health Labour and Welfare (MHLW), in March 2009 and follow the principles of the EU biosimilars regulations [2–4]. The Korean Food and Drug Administration (KFDA) issued a guideline regarding the regulation of biosimilar products (Guideline on Evaluation of Biosimilar Products) in July 2009 [5]. Health Canada finalized guidelines for subsequent entry biologics (SEBs) in March 2010 [6]. While global guidelines on similar biotherapeutic products were adopted by the WHO Expert Committee on Biological Standardization at its 60th meeting in October 2009 [7].

How guidelines for biosimilars compare around the world (Canada, EU, Japan, Korea and WHO) is shown in Table 1. 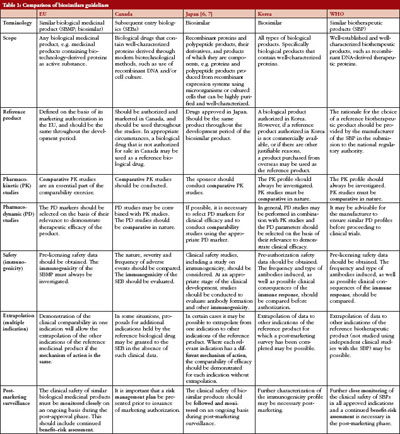 Table 1 shows that there are many similarities between the different countries/regions in their approach to guidelines for biosimilars. The guidelines are all based on the fact that biosimilars are intended to be used at the same dose(s) and dosing regimen(s) as the reference product. They all focus on the demonstration of (bio)similarity not individual patient benefit. All the guidelines also require an extensive comparability exercise to be carried out to ensure similar quality, safety and efficacy. The scientific principles underlying the comparability exercise required for a biosimilar are the same as that required for changes in the manufacturing process of an originator biological. Similar physicochemical characteristics are a prerequisite for reduction in non-clinical and clinical data requirements, i.e. use of the abbreviated biosimilars pathway.

Global guidelines for the development of biosimilars need to be scientifically sound and in accordance with recognized strict regulatory standards, such as those of the EU and WHO. On the other hand, they also need to be flexible enough to account for differences in national regulations and market capabilities.

17 Responses to Comparison of biosimilars guidelines