Home » About GaBI » News » Quality, similarity and safety of biosimilars

Quality, similarity and safety of biosimilars 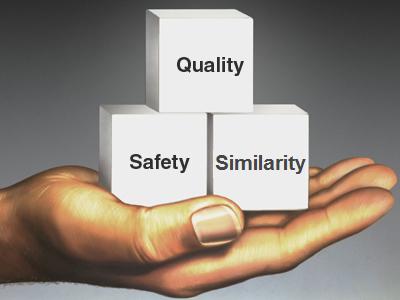 An abbreviated pathway for the approval of biosimilars was implemented in the EU in 2005. Despite biosimilars being available in Europe for more than seven years, physicians still have concerns about the use of biosimilars. Members and experts of the Working Party on Similar Biologic Medicinal Products of the European Medicines Agency (EMA) highlight what physicians need to know to make informed and appropriate treatment choices for their patients.

Pharmaceutical quality, ‘similarity’ and safety are just some of the subjects that physicians have concerns about when it comes to biosimilars.

Quality
The fear of biosimilars being of low quality or substandard to their reference biologicals is not substantiated because the manufacturing process for biosimilars must comply with EMA quality requirements in the same way as for new biologicals. Biosimilars therefore have to demonstrate that the production process is capable of consistently producing a high quality product. Biosimilars are also produced using state-of-the-art technology, which may have evolved since the development of the originator biological.

The ‘similar but not identical’ paradigm
The fact that biosimilars are ‘similar’, but not identical to their reference biologicals appears to fuel uncertainty about them. This fact, however, is the same for originator biologicals. Due to the fact that biological drugs are complex mixtures, even small changes in the manufacturing process can cause changes in the final molecule, and is why controls on batch-to-batch consistency have been imposed by EMA, on both originator biologicals and biosimilars.

Structural differences between a biosimilar and its reference biological are only acceptable within the heterogeneity pattern of the molecule, and any differences found have to be explained and justified with regard to the potential impact on the clinical performance of the biosimilar.

Safety data
Concerns have been expressed that the safety database of biosimilars could be insufficient at the time of approval, with immunogenicity being a particular concern.

Immunogenicity, on the other hand, is an ongoing concern for all biologicals, not just biosimilars. Most biologicals induce immune responses, because they are polypeptides or proteins and might therefore be recognised by the immune system as foreign. Although in many cases the presence of antibodies may have little clinical consequence, the case of pure red cell aplasia raises concerns about immunogenicity from both originator biologicals and biosimilars.

Patient- and disease-related factors are already known from the experience gained with the originator biological and therefore do not need to be re-investigated for the biosimilar. The EMA evaluation therefore focuses on potential product-related factors, such as structural alterations (e.g. aggregation, which has been implicated in the immunogenicity of epoetins) or impurities/contaminants, most of which are readily detected by state-of-the-art analytical methods. Human immunogenicity data are generally necessary before licensing to exclude a marked increase in immunogenicity of the biosimilar compared with the reference product and a post-marketing study designed to detect more subtle differences in immunogenicity may also be requested.

Editor’s comment
The research paper highlights the fact that there is insufficient data on the quality and safety issues of biosimilars in the public domain. GaBI Journal is created to fill this information gap; GaBI Journal welcomes submission of research manuscripts for peer review publication.

If you are interested in contributing a research article in a similar area to GaBI Journal, please send us your submission here.

Efficacy, extrapolation and interchangeability of biosimilars

How are biosimilars special