With biologicals making up a larger share of the new drugs approved in both Europe and the US, the pricing of drugs, and the impact of those prices on healthcare budgets, is poised to become a big issue. One way to offset these costs is to introduce biosimilars for biologicals where the patents and exclusivity periods have expired.

Many blockbuster biologicals are already, or will soon be, facing competition from biosimilars due to patent expiries and loss of exclusivity. There are also more than 200 new biotechnology products in the pipeline (phase II to registered), all of which could be future targets for biosimilars. With the increasing price of new biologicals and continuing pressure on healthcare budgets, biosimilars are expected to make up an increasing share of the biologicals market.

There has been significant harmonization across the globe with respect to patents, mainly as a result of the World Trade Organization’s TRIPS agreement (Agreement on Trade-Related Aspects of Intellectual Property Rights). This has resulted in most patent laws nowadays giving the term of a patent as 20 years from the filing date of the application. This is the case both in Europe and the US, where patents have a term of 20 years from the date of filing [2].

For both Europe and the US, exclusivity periods should also be considered (see footnote in Tables 1 to 3). 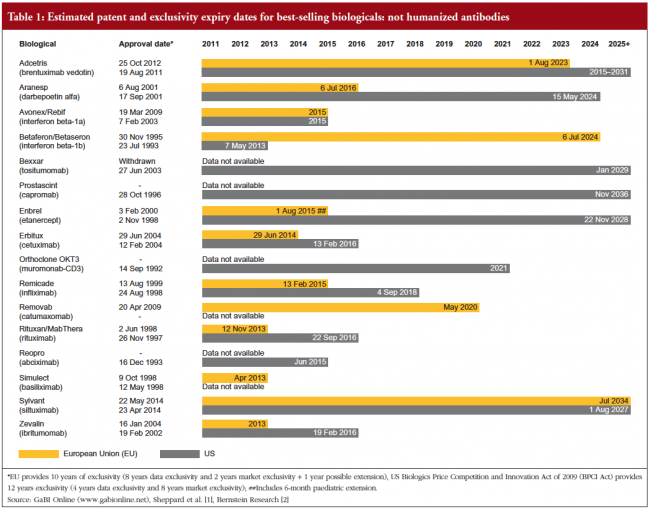 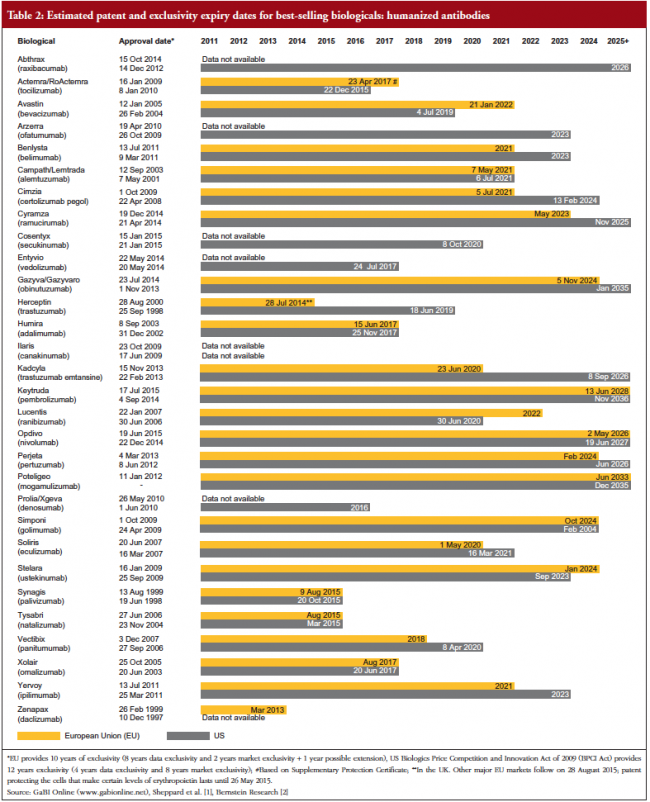 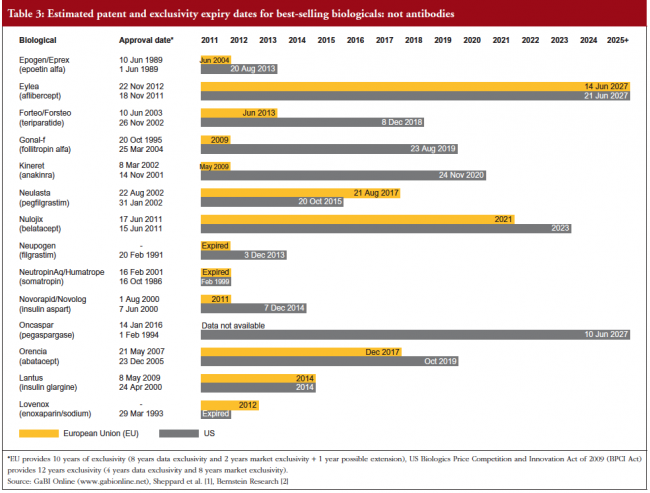 Although the EU previously defined a period of 10 years data exclusivity, this was revised at the latest review of pharmaceutical EU legislation to the following:

The expiration of patents and other intellectual property rights for originator biologicals over the next decade opens up opportunities for biosimilars to enter the market and increase industry competition. Price reduction strategies should increase adoption among physicians and patients alike, spurring increases in the biosimilars market share.

According to a report by Grand View Research, the global market for biosimilars will experience rapid growth from 2016 to 2024. The biosimilars market is expected to reach US$41.7 billion in 2024, with the most significant factor contributing to this growth being patent expiries on major biologicals. Demand is also being fuelled by governments around the world turning to biosimilars as a cheaper option to reduce healthcare costs.

The EU, however, is not without its problems. Uptake of biosimilars varies significantly between the different countries of the EU, with some, such as Italy and Spain, having quite low biosimilars use compared to countries where there is high acceptance of biosimilars, e.g. Austria, Germany, The Netherlands and Sweden [4]. However, favourable clinical outcomes demonstrated through clinical trials of biosimilars, including in the NOR-SWITCH trial of switching from the originator biological to biosimilar infliximab, are expected to increase confidence and boost uptake of biosimilars [5].